Steamboat Springs — It’s getting to the point where “inconsistent” might not be a strong enough word.

The Soroco volleyball team rode through another rollercoaster match Saturday, and in the end, the Rams just felt sick.

“They just stopped talking. They make one mistake, get down, then it’s mistake after mistake after mistake,” Soroco coach Kim Reeves said about the difference between the 25-16 second-game win and the 25-4 third-game loss. “They can play so much better. They get bumped, and they can’t get it back together.”

The Rams hung close early but couldn’t tag along when Meeker kicked it into high gear in the first game, blowing a 15-12 lead into a 19-13 advantage.

The most puzzling part about the afternoon came in the second game. Soroco poured on the points to break a 5-5 tie. Sophomore Ceanna Rossi added a point with a big block and her classmate, Corey Snyder, landed a kill just inside the far corner moments later.

Senior Tatum Lombardi set Katrina Maes up for a powerful kill and freshman Lindsay Miles even got in on the act, slamming down a kill of her own.

After a Meeker attempt soared long, the Rams had a 16-7 lead.

The Cowboys played a little better down the stretch, but Soroco showed its killer instinct and closed the game out for a big win.

Between games the teams traded ends of the court and had short huddles with their coaching staff. It’s hard to figure how any of that could have changed the Rams so dramatically. Nevertheless, Soroco quickly found itself in big trouble in the third game, falling behind 22-2. Every Ram attack seemed to fly long or into the net as the players repeatedly bumped into one another and threw off each other’s attempts. Meeker took advantage of the confusion and continued to dish up powerful swings and consistent defense.

Soroco finally scored a point when a Meeker hitter whiffed on a kill attempt, but it was far too late, both in the game and in the match.

The Cowboys closed out the four-game win by building an 18-8 lead in the final game.

“We just get down. It’s usually because we start getting nervous. We play the best when we’re calm and collected,” Grett said. “We weren’t playing calm at the end.”

The Rams will look for a more balanced match Friday when they welcome Plateau Valley. 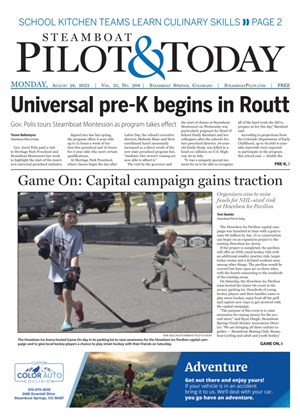