Loud in the hot tub: The Record for Tuesday, Feb. 9 | SteamboatToday.com
YOUR AD HERE »

Loud in the hot tub: The Record for Tuesday, Feb. 9

12:38 a.m. Steamboat Springs Police Department officers received a complaint of a group of people making loud noises inside a hot tub in the 1900 block of Cornice Road. The group was gone when officers arrived.

9:38 a.m. Officers received a call from employees of a vacation rental company who received a fraudulent check. Officers are investigating.

4:37 p.m. Officers received a call from the manager of a store in the 1400 block of Lincoln Avenue who suspected a man inside the store was shoplifting. When the manager approached the man, he appeared to be intoxicated. Officers could not locate the man.

6:33 p.m. Officers received a call from an employee in the 2000 block of Curve Plaza who said a man used the business’ microwave, and his food exploded inside. The employee asked the man to leave, and he refused. Officers mediated the situation.

7:14 p.m. Routt County Sheriff’s Office deputies located an abandoned vehicle in the 67 block of Colorado Highway 131 in Hayden. Deputies placed a courtesy notice on the vehicle asking the owner to move it.

9:24 p.m. Deputies received a call about a stolen vehicle in the 30000 block of Routt County Road 38 in Steamboat. Deputies located the vehicle, and the driver said he had permission to drive it, but deputies were told he did not. Deputies issued the man a citation.

11:13 p.m. Officers received a call about an argument between a father and son in the 2000 block of Copper Ridge Drive. The son left the apartment, and officers later received a call from a group of people walking down the road who said the man was chasing them with knives and screaming at them. Officers took the man to Routt County Jail and cited him for menacing/intimidation, which is a felony. 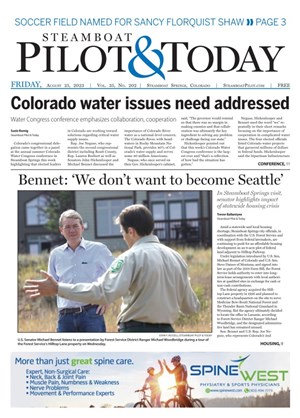